Knock! Knock! The next President: Here’s why you must forgive student loans 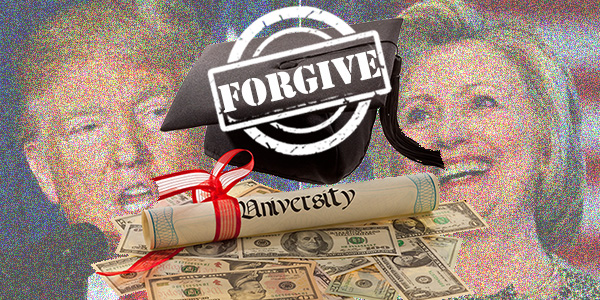 If Hillary Clinton or Donald Trump wants to beat the other presidential candidates this November, then she/he has to offer something substantial to younger voters and their families. She/he has to win their hearts and capture their minds with an electrifying proposal to solve the burning financial and social crisis: student loan debt. And, she/he needs to do it in a way that would give immediate relief to millions of debtors in the country.

What should Hillary Clinton or Trump do to become the next president?

First, $1.26 trillion student loan debt should be forgiven. And secondly, a new loan program has to be formulated that would induce college students to work in public service and which indexes repayment to income.

Before explaining why the next president should forgive student loans, let us have a look at the student loan debt statistics.

Why should student loan debts be forgiven?

Since a large part of the student loan is held by the federal government, so if the next president decides to forgive it, then there would be a huge economic stimulus. Most importantly, people would benefit from this step if not the banks.

The overall cost is quite comparable to the stimulus program formulated after the country was hit by recession in 2008. In this particular scenario, the Main Street will benefit. Most importantly, educated Americans who are burdened with a massive debt burden would be able to start new families and buy homes.

What kind of loan program do we need?

A new loan program with a forgiveness option needs to devise both for the present and future students. Borrowers who work in public sector fields must get the debt forgiveness benefit. This may attract the best brains to become a teacher or a lawyer. For instance, a person who has served in a school as a teacher for 20 years can qualify 100% debt forgiveness.

The cost of higher education won't be reduced just by a few technological gimmicks or by revising the structure of the American University. The new technology can only help in higher learning.

The next president needs to take some bold steps to resolve the burgeoning student loan debt crisis.The government's lack of interest in investing in public colleges has increased the out-of-pocket expenses of student loan borrowers by a huge percentage. Moreover, Sallie Mae's clever tactics to promote private student loans have also made the situation worse for students. If the next president doesn't take care of these issues, then better days would never come for the undergraduates and graduates in the country.