Prenuptial Agreement! In what ways does it benefit women as well? 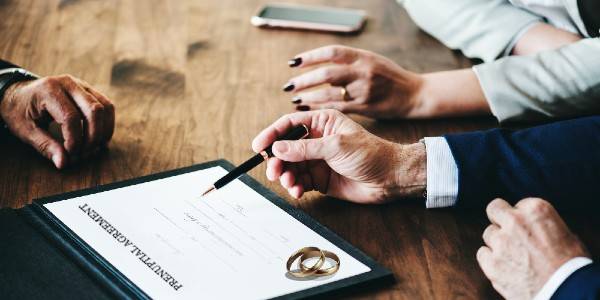 Alongside a successful career, a secure and blissful future is also what many women wish to attain in today's world. Thus women must plan and secure their finances and future. And a prenuptial agreement is one efficient way to confirm that. With the changing time, it has become a norm among many financially secure women and men.

It has been assumed for a long time that prenuptial agreement, commonly called the "prenup," is only for wealthy couples. But today, more modest couples turn to the prenuptial agreement to secure their marriage and finances. It is a necessary step regardless of your current financial status because you may never know where you will end up financially in years to come.

What is a prenuptial agreement?

A prenuptial agreement can be understood as a written contract between two individuals before marriage. It specifies the assets and debt both persons own and their property rights after marriage and in case of divorce and death.

Not only is it a good contingency plan, but it is also a reasonable idea to protect your hard-earned assets. Clearly stating one's financial rights and responsibilities before walking into marriage is an effective way of avoiding confusion or arguments later.

How does a prenup work?

States usually have their own set of rules for enforcing and validating prenuptial agreements. Prenups begin with open communication and discussions. Both parties must disclose their assets and make other vital decisions like retirement plans and benefits, household bills responsibilities, managing joint bank accounts (if any), investments, savings and spending, debts, life insurance, etc.

Lastly, couples must hire a prenuptial lawyer or attorney to draft the contract. In most cases, it is ideal for both parties to get their prenuptial agreement attorney.

How does a prenuptial agreement benefit women?

By asking to separate debts in a prenuptial agreement, women can have the benefit of debt protection from the debt responsibilities of their spouses and vice versa. "With a prenuptial agreement in place, the woman can keep her own career and earnings separate from her husband's, ensuring that she is not left with his debt if the marriage ends," said Lorien Strydom from Financer.

For instance, if your spouse, poor in handling money, has entered into marriage with pre-existing debts, or acquired debts during the marriage, those debts can be imposed on you in situations like divorce or your spouse's death unless separated in a prenuptial agreement. Although when in debt, you can use various debt relief programs to help you come out of debt quickly, separating debts before walking into marriage is always ideal.

Prenuptial agreements can benefit you in spousal support and custody.

Spousal support, commonly called alimony, is another vital point that often comes up in the event of a divorce. Financial support that either spouse may get from the other and who gets the custody of a child is among the significant debates in divorces.

A prenuptial agreement is ideal when couples are still in love, and it can save the bitterness of relationships from increasing further. You can mention clauses that ensure you secure alimony or decide neither spouse will pay alimony. Alternatively, agree to joint custody or sole custody.

Assets acquired before marriage are considered separate or premarital assets, and those acquired during or after marriage are taken as marital property. “Prenuptial agreements are an agreement between two people who are about to get married,” said Peter Beeda from fhalend, “which states how their assets will be divided in the event of a divorce.” Discussing and clarifying assets rights can benefit women by protecting the assets from being claimed by their spouses in case of a divorce.

Prenuptial agreements direct you to a peaceful future

In most cases, divorce takes place in painful circumstances. In such situations, having already decided the course in a state of affection and hope can help make the divorce less challenging and direct you to peaceful terms when the marriage gets sour.

Prenups are long associated with indications of mistrust or a lack of trust between partners and anticipating the worst in marriage. The belief is firm when a woman initiates a prenuptial agreement. However, in reality, each person is equally entitled to protect their current and future possibilities, and a prenup in marriage is just a part of doing it legally.

It is essential to discuss financial responsibilities, and these are written in a prenuptial agreement can help avoid future conflicts and arguments. Prenups protect you from paying alimony and fighting over custody and save unnecessary court struggles.