Property and debts – How do these get divided in case of divorce? 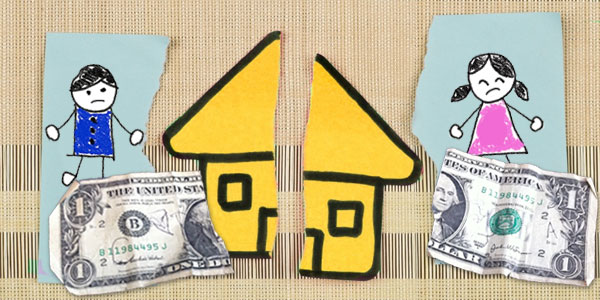 Debt and divorce are perhaps the two most complex things that can happen to you. Both are tough to handle and both leave behind a bitter feeling (in most of the cases). So, it is always better to try and solve all kinds of problems in relation to your debts and divorce from the beginning. It is best to clear your debts before filing for divorce. This is extremely important because laws vary from state to state and if you are in a community property state, you are going to find yourself in a double mess if you or your spouse, fail to clear your debt before filing for divorce.

Dividing debts and property in divorce

The division of debts and property in case of divorce is done based on the type of state you are in. The states are mainly divided into simple and community property states. If you are in the simple states, the debts and property are divided just as incurred or acquired by the individual. Other than that, the property can get divided based on the needs of the other spouse just as the court is going to suggest.

However, these debts, property and assets are supposed to get divided between the spouses only if these have been incurred and acquired within the lifetime of the marriage. The states which come under the community property rule are Alaska, Arizona, California, Idaho, Louisiana, Nevada, New Mexico, Texas, Washington, Wisconsin, and Puerto Rico.

The others states believe in equitable distribution of property and amongst the spouses. In these states the earnings which have been accumulated during the time of the marriage gets divided fairly. However, this necessarily will not mean that it is going to get equally divided in between the spouses.

In addition, the division in between the spouses will not mean that it is going to be a physical division. The spouses in general get a percentage of the total value of the property as it gets stated by the court after the divorce filing. Each of the spouses gets their personal assets and property and debts. The entire worth of these things taken together adds to the percentage that is given to both. It is extremely essential that you should never try to hide any of your assets so as to protect it from getting divided.

Distribution of marital and non-marital property

As for the house, the spouse who provides for the children or stays with them most of the time gets to stay in the house. However, if you have no children, the house will be given to the person who separately owns it. This is going to happen in the states which believe in the law of equitable property distribution.

As for the debts, other than the law based on the community property states and the equitable distribution ones, state laws vary from one to another.