California Wage garnishment laws - How to save wages from a collection agency? 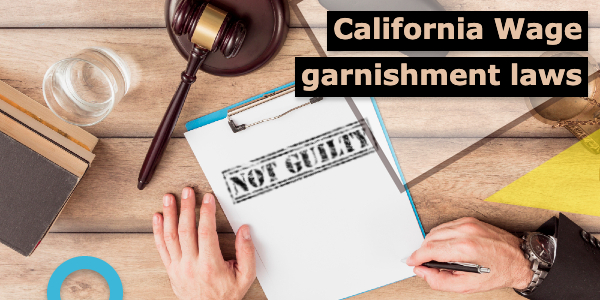 Can a collection agency garnish your wages in California?

Both state and federal law in California has shielded a part of a consumer's earnings from collectors. While a judgment creditor may ask the court to grant a wage garnishment order, the amount cannot exceed 25% of the debtor's total monthly income.

The degree of protection is even higher for many individuals. This is so that the creditor can only take 25% or 50% of the debtor's disposable income, which is greater than 40 times the applicable minimum wage.

While a considerable portion of wages was under wage garnishment exemption, once it was placed into the consumer's bank account, it was no longer protected. According to a California law, all of that has changed as of September 1, 2020.

For further discussion about wage garnishment in California, let’s look into the basics first.

Debt collectors are only permitted to garnish your wages, bank account, or benefits if you have already been sued and a court has rendered a judgment against you for the money owed. Federal and state laws restrict the amount collectors can take from your disposable earnings and bank accounts.

Many individuals wonder, Can payday loans garnish wages? Yes, they can. But the creditor must be a legal payday loan lender. To collect consumer debt, collectors typically need a court order judgment.

Your disposable earnings may also be garnished for unpaid taxes, unpaid alimony, unpaid child support, and unpaid public student loan debt. Student loan debt, local taxes, and other similar debts are unique, and they do not need a court judgment.

Can a creditor garnish your wages after 7 years?

The consumer debt statute of limitations in California is for four years. This makes the debt uncollectible after four years because a creditor cannot succeed in court after that point.

However, if a debt collector has filed a lawsuit against you and won, they may be able to garnish your disposable earnings until the amount is settled. That could be seven days, seven years, or even more.

How does wage garnishment work?

As a debt collection strategy, garnishment of wages enables judgment creditors to deduct money from their paychecks to settle past-due debts. For the majority of consumer wage garnishments, a court order is necessary.

When Can Creditors Garnish Wages?

After several debt collection efforts, the creditor can sue a person who has exceeded the pay period and failed to pay off debt. These debts are primarily unsecured debts such as credit card debt, medical bills, payday loan debts, utility bills, loans, etc.

For the creditor to be able to garnish the debtor's earnings, the creditor has to file a debt collection lawsuit, and the court must give a judgment in the creditor's favor.

Although there are a few exceptions, this is often the only way a creditor can legitimately garnish a debtor's earnings.

Federal law states that the minimum wage for covered nonexempt employees is $7.25 per hour.

Under California law, the maximum amount of wages garnished can be:

The debtor may be eligible for a bigger exemption claim if he/she can show proof of requirement. Under California law, "the portion of the judgment debtor's earnings which the judgment debtor proves is necessary for the support of the debtor or the debtor's family supported in whole or in part by the debtor is exempt from levy under this chapter." (Cal. Civ. Proc. Code § 706.051).

Since 1988, an automatic earnings withholding order has been a part of all court orders for child support. The other parent may also request that the court issue an order to pay garnishment if he/she falls behind on the child support payments.

This kind of wage garnishment has a limit in federal laws. If a parent is currently providing for a spouse or child who isn't the subject of the order, up to 50% of the disposable income might be taken to pay child support, as per wage garnishment laws maintained by federal and local governments.

Up to 60% of the disposable income may be seized if the parent isn't providing for the other spouse or kids. As per the wage garnishment laws, if a parent is more than 12 weeks behind on the payments, an extra 5% may be charged (15 U.S.C. § 1673).

The U.S. Department of Education or any organization collecting for this agency may deduct up to 15% of your pay if you are in default on federal student loans (20 U.S.C. § 1095a(a)(1)). "Administrative garnishment" is the term used to describe this type of garnishment.

However, you are allowed to keep money that is equal to 30 times the weekly federal minimum wage in effect. The amount of income 30 times the minimum weekly salary is shielded from garnishment by federal law (15 U.S.C. § 1673).

If, as a taxpayer, you owe unpaid taxes, the federal government can deduct that money from you as an employee's wages (a process known as a "levy") without a court judgment.

The taxpayer's standard deduction and all personal exemption deductions are added to determine the weekly exempt amount. The taxpayer must be granted these deductions during the tax year in which the levy occurred. After that, divide the total by the number of weeks (52).

If you owe California state and federal taxes, state and municipal governments may also garnish your weekly disposable earnings for recovery. California may withhold up to 25% of an employee's disposable earnings if he/she owes back taxes on that state. So, keep an eye on your tax debt issues if you owe money, communicate with the appropriate government agency, clean up back taxes, and get debt relief.

An employee may be subject to multiple wage garnishment orders for various debts such as personal loans, medical bills, credit card bills, etc. If this occurs, the total amount that can be taken for the wage garnishment order, apart from child support, cannot be more than 25% of the overall disposable income.

Any child support garnishments must be served first if there are other garnishments against that person. The balance can only be paid if there is sufficient cash on hand.

In California, there are several steps in the wage garnishment process.

1. The creditor sues the borrower to win a judgment

A judgment is required for garnishing wages. So, the creditor needs to file a lawsuit to get a judgment. If the creditor prevails, the court will issue a judgment specifying how much the borrower owes. This will cover the debts, associated expenses, charges, and interest. Wage garnishment requires a different procedure after the judgment is granted.

The creditor is referred to as the judgment creditor or plaintiff during the wage garnishment process, while the debtor is referred to as the judgment debtor or defendant. The employer garnishes the wages from the borrower. The levying officer is the sheriff or another similarly designated agent. The creditor and the levying officer take the steps coming next.

2. Your employer receives documents from the creditor

The creditor will apply to the court for a writ of execution. This effectively serves as a documented directive to your employer to withhold earnings from your paycheck to comply with the judgment. The levying officer will serve your employer with the writ, which is effective for 180 days.

The court will attach an earnings withholding court order, financial statement and claim of exemption form, employee instructions, and other documentation to the writ. These papers may be referred to as the garnishment packet, and the employer has 15 days to return a response form to the court. If he/she didn't respond within 15 days, he/she would be responsible for the employee's debt.

The garnishment papers must be served to you by your employer within ten days. Your first paycheck will be garnished ten days after serving the employer. The writ may occasionally be served along with a memorandum of costs following judgment. In this document, additional expenses related to the collecting process are listed. The borrower has ten days to contest the other extra expenses.

4. The borrower may object and respond with exceptions

If the borrower objects and requests exemptions as the judgment debtor within ten days of being served, the wage garnishment won't start. After the garnishment has begun, the borrower can still request an exception, but it will take longer to process. He/she can get assistance from a consumer law attorney during the procedure.

He/she can object as being exempt, not owing the amount, not being adequately served, or he/she received a discharge in debts from bankruptcy. If you require money to support others or for basic living necessities, you can also object and request an exemption in California.

The borrower must carefully read the employee guidelines in the garnishment packet to request exemptions and objects. The financial statement and claim of exemption form must be filled out and submitted to the sheriff's office. Save the original and make a copy for filing. The borrower may contact the sheriff's office or court clerk to learn more about the case. Usually, they are unable to provide legal help.

5. The objections and exemptions will be reviewed in court

Any objections and exemptions from you as the borrower will be served in court. The creditor will have ten days to raise any issues with them. Following this hearing, the court will decide whether to garnish your wages in full for the creditor's proposed amount, in part based on your exemptions and hardship, or not at all.

If, as a debtor, you fail to attend the hearing in court, the creditor will be able to garnish your wages as a result of a default judgment, and you will have to take further actions to pause or stop wage garnishment.

6. The garnishment stops or goes on

You may consult a bankruptcy lawyer or an attorney to know these processes in detail.

How To Stop a wage garnishment in California

There are a few ways to stop wage garnishment in California:

California offers several resources to assist you with the garnishment procedure.

Listed below are a few entities to get you started by following the state and federal law: