Student loan debt: A new subprime bubble in the offing?

In the recent past, total outstanding student loan balances paid by the student debtors were almost the same as their income. Based on this socio-economic trend in the country, St. Louis Federal Reserve published a report titled “Student Loan Debt Delinquency: A Big Problem Getting Worse?”. According to the Federal Reserve, the rate of delinquency in terms of student loans is 27 percent out of the $1.3 trillion college debt.

The problem is exacerbated with the faster increase of tuition costs than the rate of inflation in the country. Premium educational institutes and universities are too costly for most of the students to afford. This is adding fuel to the fire, thereby increasing the number of student loan defaulters by leaps and bounds.

Prior to the publication of the above report, it was found that the rate of delinquency of more than 30 days have increased very fast within a span of more or less 10 years. Moreover, delinquency during the same period increased from 11 to 17 percent. Still, many analysts observed that around 77 percent of the increase happened during 2004-2010. Basically, the drastic hike in the rate of delinquency was an immediate result of the economic recession of 2007.

Several analysts have reasoned that rate of loan default rose from 15.8 percent to 17 percent in 2010. This in turn indicated that student loan defaulters were at their peak. Both Fed researchers, Juan M. Sanchez and Lijing Zhu stated that amongst all the student loans originated during October-December 2010 period, almost 45 percent of them weren’t in repayment. Hence, it was established that only about 55 percent of the student loan borrowers were making the repayments.

As per the Fed, the level of loan delinquency was much higher than any other types of debt - mortgages, credit cards, auto loans, etc. It implies that delinquency rate increased to one in four now from less than one out of nine student loan borrowers.

Increased college debt is another time-bomb ticking toward an overwhelming catastrophe for the people and the US economy. Revolving around this scenario, we could now identify some of the trends in our country now: 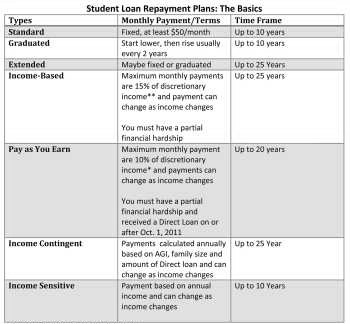 * Image Source: U.S. Department of Education (DOE). *Discretionary income is referred to the difference between adjusted gross income (AGI) and 150 percent of the poverty line for the person’s family size and state of residence.

According to the economists, if you defer on making the monthly loan repayments or make very small payments, then you’ll not be able to cover the basic interest on your debt. Therefore, you need to make larger debt repayments as much as possible every month.