Debt settlement or bankruptcy - Which one is better for your credit? 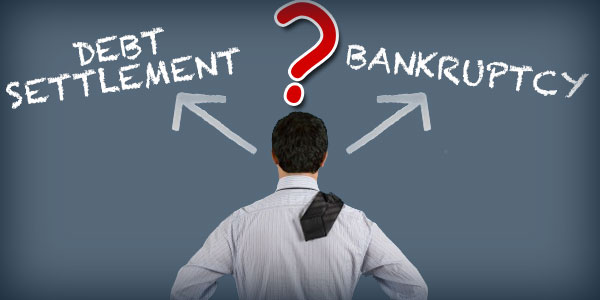 It depends on whether you declare Chapter 7 or Chapter 13. Chapter 7 Bankruptcy will remain on your credit report for 10 years, and Chapter 13 bankruptcy stays for 7 years from the filing date. This is the same with all the major credit reporting agencies, may it be Equifax, Experian or TransUnion.

Of the two, debt settlement tends to have a more severe impact on the credit rating, although it is not as negative as a bankruptcy! During a settlement program, the unsecured debts appear as past due until they are settled, at which point they will be listed as “settled for less than the full balance”, “settled in full” and in rare instances, “paid in full” with the credit bureaus. Since the payments are considered late during this process, it has a negative effect on the payment history portion of the credit score.

A debt discharged in bankruptcy will not erase any delinquent payment prior to filing, but on the bright side, any discharged or “charged off” accounts will be reported as “amount owed zero” once after bankruptcy. Also, if you declare bankruptcy and voluntarily dismiss it, both the filing and dismissal will continue to be reported for 7 to 10 years (depending on whether you claimed Chapter 7 or Chapter 13).

The consequences of credit counseling vary depending on what the credit card company reports to the credit bureaus. Some creditors will simply report as “enrolled in a debt management plan”. Other credit card companies, notably First USA, report their card holders as past due until they have made 3 consecutive payments, which will most likely affect your credit negatively. Many lenders openly insist that they consider credit counseling to be on par with filing Chapter 13 Bankruptcy in terms of the credit impact, while many more view it more positively.