Why are old people unwilling to retire under the pressure of inflation? 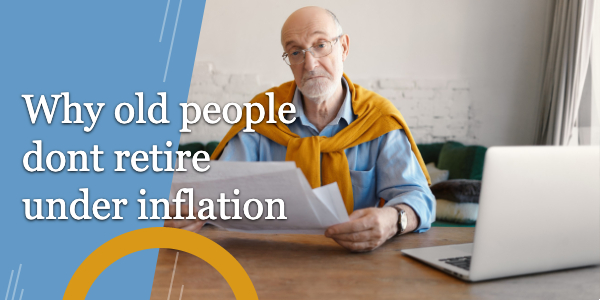 As the nation deals with one of the worst inflationary periods in the past 40 years, higher prices are causing many Americans to rethink their spending plans. The soaring prices of necessities like groceries, gasoline, or rent are squeezing their financial security.

According to the BMO Real Financial Progress Index, 21% of Americans have reduced their retirement savings due to inflation. Nearly 55% of Americans, according to a separate Bankrate survey, claim to be falling behind on their retirement savings, despite the fact that nearly 3 out of 5 make the same or higher contributions than they did the year prior. High inflation is the main barrier preventing Americans from saving more this year.

How does inflation affect retirement savings?

Followed by the pandemic, inflation has caused massive havoc on people's finances by decreasing their purchasing power and disrupting their savings strategies and retirement funds.

Most Americans are inclined to cut back on their retirement savings or put away lesser than before to suffice their households with the growing prices of commodities.

Along with tackling the rising costs of almost everything around, Americans also have to deal with a volatile stock market. High rates of inflation and rising prices could lead to more stock market volatility, which would be more damaging to retirees who are constantly withdrawing from their investment accounts.

Compared to last year's gains, the S&P 500 has lost more than 15% this year, while Nasdaq has performed even worse, falling by more than 28%.

Inflation severely affects retirees by reducing their purchasing power and increasing lifestyle costs paid by distributions from investment portfolios. When inflation is high, consumers lose a large portion of their purchasing power, which makes a huge difference in their fixed income sources.

"The amount of money people have socked away for retirement won't cover expenses at the current rates for as many years as some had planned," said Caroline Duggan, Chief Brand Officer at Lumineux.

Due to inflation, a million dollars held in a retirement account two years back would be worth about $120,000 less today. It means they require more money to purchase the same goods in comparison to earlier times.

Fear of running out

The real value of retirement savings is impacted by inflation. Inflation can significantly devalue the savings and income of retirees over time.

"The average life expectancy is on the rise, and people are living longer, healthier lives," commented Lorien Strydom, Executive Country Manager of Financer.com.

"But with inflation eating away at the value of their savings, many Americans are worried that their nest eggs won't be enough to see them through their golden years. As a result, they're either delaying retirement or working well past retirement age," Lorien explained.

According to various surveys, retirees spend more in the first two years following retirement than they do the years before.

One reason why retirees are tempted to spend more immediately after retirement could be because they have more free time now to fulfill wishes they have long snoozed than they did before.

Maintain the cost of living

Most individuals post-retirement dream of relaxation and freedom of time to fulfill their suppressed desires while maintaining their standard of living. However, the high cost of living and health care costs due to inflation add up to reasons why Americans are uninterested or wish to delay their retirement.

"The purchasing power of the dollar has declined steadily over the past few decades, and this trend is expected to continue," said Erik Pham, CEO of Health Canal. "This means that retirees will need to have more money saved up in order to maintain their standard of living," he added.

Post-retirement, most individuals may depend on fixed income sources like pensions, social security, or interests and dividends, etc., as their retirement income. Not all of these sources provide similar protection as inflation rises.

In the case of pensions, since the benefits are partly based on pre-inflation salary figures, they may be adversely affected by high inflation rates occurring in the final years of a retiree's career.

Again, pension benefits may or may not be inflation-adjusted. It means the retires' income source could be negatively impacted if they only rely on their pension income without making purchases.

The benefits of Social Security are compared to price indices each year. The cost of living adjustments is determined by using price index changes yearly, which also impacts the Social Security program's benefits.

The government does make an effort to raise it to reflect the inflation rate at the time, but it may be different from the actual rate of inflation.

Since 2000, it has been estimated that the purchasing power of Social Security benefits has decreased by about one-third. Meaning the cost of living adjustments have been viewed as being woefully inadequate.

For instance, there was a 5.9% increase in Social Security benefits this year, yet it was not enough to keep up with the 8–9% inflation rate.

It has been estimated that at least 46% of retirees collect passive income from either interest or dividends. When the Federal Reserve raises the federal funds rate to fight inflation, interest rates usually increase, but the dividends may take a different course.

However, depositing money in a savings account or a certificate of deposit (CD) will earn interest for as long as it remains. It means the longer you keep your money in the accounts, the more interest it makes. Even so, the interest rates offered in savings accounts or CDs are too low to keep up with the rising inflation.

Companies distribute a portion of their net income to investors through dividends. When inflation is high, the Federal Reserve may increase the rate, which makes borrowing money more expensive and slow down the economy. As a result, companies may produce lower earnings and have less money available to pay dividends if the economy weakens.

What can retirees do to protect their retirement savings?

There are a few ways new retirees can lower their risk if they are worried about running out of their pre-retirement income.

Savings is difficult for many individuals, and the 40-year highest inflation rates have made the task even harder. The pinch of high inflation rates, which have changed the rules of personal financial planning and budgeting, is being felt by older Americans close to retiring.

Most older Americans struggle to manage their finances and maintain their standard of living with rising inflation. These issues and other concerns that inflation brings play an essential part in why Americans are not interested in retiring soon.

To have enough assets to last through the later years, retirees or soon-to-be must understand how inflation may hurt their retirement income and choose an investment strategy that best suits their needs.

Older Americans can also seek advice from a financial advisor to determine what investment strategy they should adopt to protect their fixed income post-retirement.