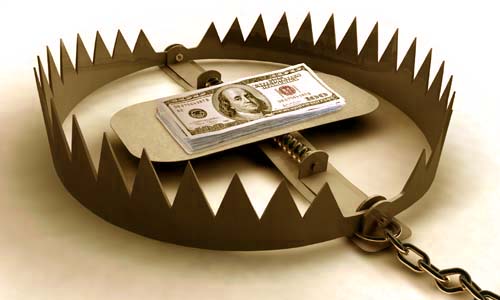 By now, most of the US citizens know that once you get into the payday loan trap, it’s extremely difficult to get out of it. A new report by the Consumer Financial Protection Bureau (CFPB) also affirmed the fact, as it pointed out in details that how the payday loans have been sucking the life-breath of the consumers.

Who offers the short-term credits?

The payday loans are mostly offered by the storefront lenders, who secure the loans with a post-dated check. Usually the lenders don’t even check the credit of the applicant before granting the loans. The repayment time is mostly set after a two-week gap, and the payment is accepted in a lump sum comprising of the interests charged along with the principal balance.

Click to figure out your APR and monthly payments

The banks also offer such short-term, high-interest cash aid in the form of deposit-advance products. The repayment in these form of products are directly debited from a checking account.

What the new report indicates?

According to the CFPB report, an average borrower takes out around 11 payday loans within a duration of 12 months. It also stated that a regular consumer spends around $574 as yearly fees on the outstanding loan balance, even if the principal payment is not considered. In fact, the report has revealed that around 25% of the borrowers spend $781 per year, merely as fees on their payday loans.

Richard Corday, Director of the Consumer Financial Protection Bureau termed this to be a high-sustained use and pointed out that the consumers not only roll over the existing loans, but also return to take out a new loan after paying off an old one. Corday also stated that, “Payday and deposit-advance loans, while designed for short-term emergency use, are leading many consumers into long- term, expensive burdens.”

Figures reveal that around 48 percent, i.e nearly half, of the storefront payday borrowers has more than 10 transactions with the payday lenders in the 1 year time-period covered in the study conducted by the CFPB. Nearly 14 percent of the borrowers had been found with 20 or more loans.

As a result, the federal regulators are trying to impose restrictions on the payday lending industry, to ensure that the consumers can avoid the high interest and short-term lending traps that entangle them in a debt cycle. On the basis of the study, the Consumer Financial Protection Bureau has decided to impose waiting times between the loans.

The regulators have decided to keep the banks and other private creditors under close supervision to prevent the misappropriation of the deposit advance products and payday loans. The new mandate will necessitate the banks to determine a borrower’s ability to repay a loan. Besides, the banks will also need to disclose the APR (annual percentage rate) for the loan, so that further deceits on the lending fees and the charged interests can be prevented. Rules will also be imposed so that the banks or the lenders will have to wait for a full billing cycle before allowing a new loan to the same consumer, and have to ensure that they pay off the first loan in full before taking out a second one.