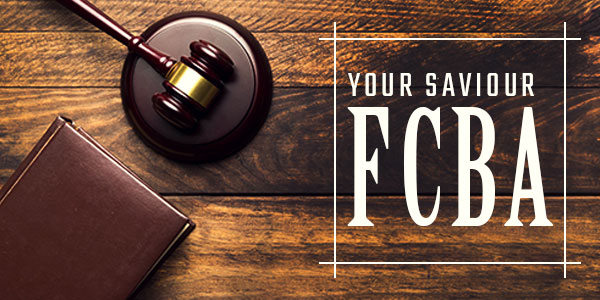 Does this mean, you can’t get back your money? Is there any scope to dispute these kinds of incorrect charges?

Calm down! Yes, there is the Fair Credit Billing Act (FCBA), which can be your savior.

What is the FCBA?

The Fair Credit Billing Act (FCBA) has been designed in 1071 to protect consumers from credit card company’s unfair charges. This law protects subjects like “open-end” accounts and revolving charge accounts.
This law doesn’t apply to other loans like auto loans, mortgage, payday loans, and personal loans.

How does the FCBA ACT help to protect consumer rights?

The FCBA law allows credit cardholders to protect themselves from unfair and incorrect charges by the credit card companies.

Here are the things consumers get from the FCBA Act.

How can consumers use the FCBA to protect their consumer rights?

It is true that FCBA provides protection to consumers. But, if the consumers do nothing after knowing that there are errors in the credit card bill, then the law can’t do anything for them.

The consumers have to use the FCBA Act properly to protect their consumer rights.

How can they do that?

1. The consumers need to dispute a charge within 60 days

If a consumer catches a billing error, then he/she has to act quickly. The consumer has to notify the dispute or wrong charges to the credit card company within 60 days. Otherwise, the consumer won’t be eligible to use FCBA rights.

2. The consumers need to notify the issuer about the unauthorized charge

The consumer has to notify about the fraudulent charges, or unauthorized charges to the issuer to get the FCBA protection.

3. The consumers need to mail the dispute letter

Once the consumer finds billing errors or other issues, he/she has to mail the complaint directly to the credit card company. Calling or other means of unauthorized notification is not enough. Send the letter through a certified mail.

4. Consumers need to include all the details with the dispute letter

With the complaint letter, the consumers need to mention their names and account numbers, the dollar amount they are disputing and the reason for disputing the error on their report.
Consumers can get the sample template of the disputing letter from the Federal Trade Commission’s sample dispute letter.

5. Consumers need to keep the update about the complaint

Only disputing is not enough. The consumer needs to keep the update regarding the complaint. As per the law, the card issuer has to acknowledge the dispute within 30 days. Remember, the investigation takes a few months to complete. In the meantime, the card issuer can’t report the disputed charge as a late payment to the credit bureaus. The issue is also not allowed to collect payment on the disputed portion of the bill or charge any interest.

If a consumer is not happy with a credit card purchase, then under the FCBA law, he/she can complain about the quality of the product. As per the law, the consumer can delay the payment of that specific charge on his/her credit card bill until the complaint is resolved. However, the consumer has to invoke this right. He/she has to inform the merchant first and send the dispute letter properly.

8. The consumers can hire a lawyer

If the consumers think that the card issuer has violated the FCBA Act, they can file a lawsuit against the credit card company as per the Consumer Financial Protection Bureau or the Federal Trade Commission directives.
In this process, they can hire a lawyer to know the Fair Credit Billing Act properly.

Lastly, it is very important to understand the law that has been designed to protect our rights when it comes to any consumer products. In this case, the FCBA law also provides protection if a person lost his or her credit card. Or, if the card gets stolen, the FCBA law comes as a lifesaver. However, we must understand the laws properly to get benefitted. So, read about all the laws including FCBA to protect your rights.