How Student Loan programs turn to waste and raises debt? 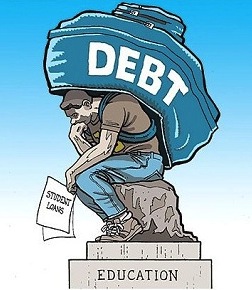 Student loan debt crisis is not something new or unheard of. It has topped headlines since it galloped over the $1 trillion borderline, and can boast of an ever-increasing default rate. Thousands of the American citizens are down with their student debt burden. What makes it worse is that, the student debts can’t even be easily eliminated, mainly due to their non-dischargeable status.

Only a lucky few are born with the silver spoon in their mouth, and can fund their own education. Rest of the U.S. citizens has to seek scholarships and grants to pursue higher education. Both federal and state governments offer financial aids to the students who’re willing to pursue college education. While some provide assistance purely based on the needs of the student, in certain cases, the grants are offered only to those who’re deserving and meritorious.

The federal Pell Grant Program offers financial assistance purely based on the requirements of the students. Any college student who fulfills the income limits can apply for the federal grant. Academic performance is not taken into consideration while determining the eligibility for the program, which was initiated in 1970. The number of recipients in the first year was around 176,000, which has gradually swollen to 9.6 million recipients in 2010, receiving $35.6 billion dollars as grant.

The state sponsored merit aids, on the other hand, offer educational assistance, at times, based on the performance of the students. For e.g. In Georgia, students getting ‘B’ average in high school and above are entitled to scholarships. Family income isn’t of much importance while determining eligibility for merit aids in the state.

Both forms of grants and aids have their own set of pros and cons, and both are derived from the taxpayers’ contribution. Several students funded only on the basis of their ‘need’ fail to graduate, thereby turning the federal grants into a waste. Again, many students who don’t need financial assistance for their studies receive grants based on their ‘merit’, thereby depriving other students who would actually need it.

How the grants turn to waste?

The allowances just turn into a waste of the taxpayer’s money when the right kind of candidates doesn’t receive what they deserve. Students who fail to succeed usually resign with a sense of failure, dejection, poor work habits, unemployment and a huge debt burden.

The students who receive aids on the basis of their school grades or standardized test scores are gradually growing in number, which strain the funds of the government. A huge portion of the government subsidy is channelized towards students coming from the middle or upper-middle income families, while meritorious students from the lower income group are pushed further backwards.

The low eligibility standards for the aids can be blamed for this discrepancy.

What can be the solution?

Lack of proper yardstick turn the federal student loan programs into a waste. The consumer debt volume has also been expanding as more and more student debts are building up over time. Though termed as good debt, student debts are the most prominent form of unsecured consumer debt that has been bothering the citizens for long. To arrive at a solution, the government would need to formulate a system of providing grants and aids, which would take both ‘merit’ of the student and the income measures into account. Only in this way, the wastage of the funds can be reduced. The combined need-merit system would also make sure that only the deserving and the needy receive the financial aid for their higher studies.