Warning - Student loans are the biggest enemy of parents 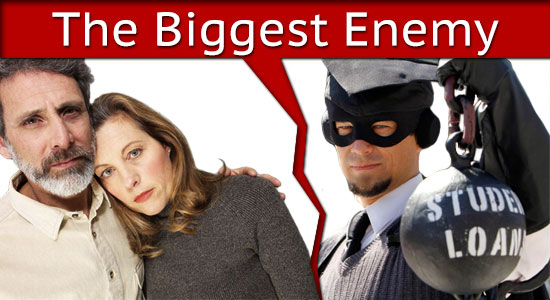 Steve Mason was an emotionally dead man when his 27-year old daughter died due to liver failure 5 years ago. He was completely devastated and shocked like any bereaved father. But life is merciless. It continues to bring fresh challenges everyday and Steve was no exception.

Lisa had 3 small children. Steve and his wife Darnelle had to take responsibilities of these motherless kids aged between 4 and 9 years immediately. The couple knew that it wouldn't be an easy job to raise these kids but they still took the challenge without any hesitation.

Steve works as a pastor and makes $75000 every year whereas his wife Darnelle earns even less than her husband. You can hardly expect much more than a person working as a director at the church. Soon after they have started looking after Lisa's children, student bills kept coming into Steve's house. Steve had cosigned for Mason's private student loans in the past. Lisa had taken out a $100,000 student loan from a lender for studying in a nursing school. Once lenders came to know that the primary lender is no longer in the world, they started calling Steve for payments.

The situation was so bad that Steve started looking for a second job after a few days. It was simply impossible for him to raise 3 kids and pay $2000 on student loans every month.

Steve was in extreme emotional pain. Life couldn't be more bitter for him. He called each lender and begged for financial assistance. Since, these were private student loans, lenders were not legally obligated to offer help. Some lenders sympathized with Steve, but they revealed the facts unabashedly. They were not bound by federal laws to offer financial assistance to borrowers or co-signers like Steve who has lost his child. Lenders can discharge loans or offer help only out of their own free will.

Steve's situation would have been slightly better had he taken out a federal student loan. He could have received some help from lenders. But, that was not the case. However, not all private lenders are bad. Navient Corp., one of the chief lenders of Steve had dropped interest rate on the loans and cut down balance in the past. In fact the company is ready to offer more help to Mason after hearing his loss. They have already brought down the interest rate to 0% on 3 loans. Besides, the outstanding balance has been reduced from $35,000 to $27,000.

Being a co-signer on a student loan is a sin

Given the circumstances, it won't be shocking if Steve repents his decision to become a cosigner for his daughter. Unlike Navient Corp, American Education Services, the one responsible for collecting payments from Steve, doesn't believe in forgiveness. When they were contacted, all they could say was that Steve should contact the original lender National Collegiate Trust. Steve had already walked on that road but didn't get any success. NCT had refused to offer any kind of mercy or assistance to him.

Student loans are taken out to educate children and boost their career. Unlike credit cards, it is a good form of debt. Somehow Steve has committed a sin by agreeing to become a co-signer on his daughter's student loan. He is drowned in debt for almost the rest of his life.

Steve is not the only one who is suffering

Steve is not the only parent who is going through hell. Angela Smith from Chesapeake requested a private lender to reduce the student loan amount by $40,000. Her husband had co-signed on the loan for his son Donte's education. To their utter shock and despair, Donte was shot to death in the year 2008. Soon after Donte's death, the couple started getting calls from lenders. All of a sudden, their life was not perfect or normal anymore. Not only were they dealing with police and attorneys but also with hungry lenders soon after the death of their beloved son. Both the lenders and attorneys were only making their emotional wound deeper. They were only reminding the couple that Donte is no more in the world.

Even the brutal murder of Donte and 150,000 signature from sympathizers were not enough to pacify lenders. They were adamant to retrieve payments.

Steve has two options and dreary future ahead

At this moment, Steve has only 2 options. The first option is to sit with lenders and arrange a payment plan. The other option is to explain his extreme financial hardship to the court and hope that the loan will be forgiven through bankruptcy.

Steve is almost 60 years now. He has given up his dream of retirement now. As per his calculations,. he'll have to look after Lisa's children even at the age of 70. Steve has already exhausted his retirement funds since he doesn't have lots of savings. Whatever extra money he gets is used for the kids and loan repayments.

At this stage of life, any man would want to have a relaxed lifestyle. As ill luck could have it, Steve can't think about spending a leisurely life in this decade at least.