Shining light on the 341 Meeting of Creditors 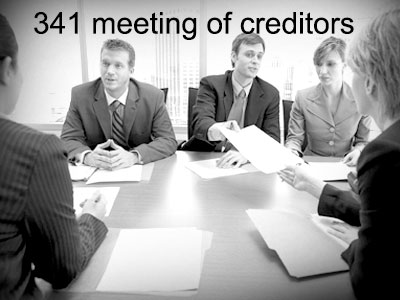 The meeting is fundamentally the same regardless of the chapter, although the meeting takes a little a longer to complete under Chapter 13 because the trustee has to additionally determine whether the proposed repayment plan will functionally work.

The 341 meeting provides creditors an opportunity to protest the bankruptcy. More often than not though, they do not appear and the trustee acts on their behalf. Typically, secured creditors appear only to ascertain the condition and location of the collateral securing the debt. However, unsecured creditors occasionally appear to challenge the validity of the bankruptcy or to determine if large recent transactions were made without a good faith intent to repay.

After the petitioner is placed under oath, the trustee asks a series of scripted questions. The bulk of the questions asked in the 341 creditor's meeting usually concern the petitioner's financial situation and desire to file bankruptcy. Many times the petitioner reads a prepared statement and brings a variety of supporting financial documents.

After the information provided by the petitioner is reviewed, the trustee will make a recommendation to the court as to whether or not the court should grant a bankruptcy. Creditors have 60 days following the "meeting of creditors" to object to the trustee's recommendation. So long as there are no objections, the bankruptcy judge assigned to the case will then sign a discharge order.