Olympic gold medal - Too costly for US athletes due to victory tax? 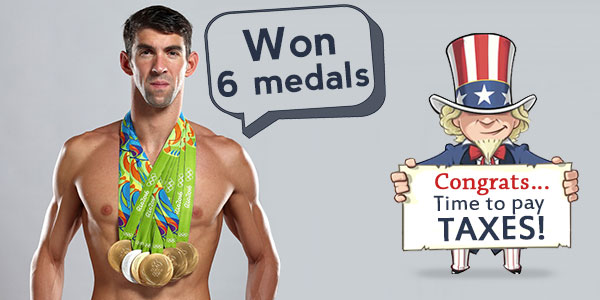 Nothing comes for free. This adage has proved to be true for Olympic medals. No, I’m not speaking of the hard work, years of practice and proper training. These were already there. What I’m speaking of is the ‘victory tax’ where Olympic medal winners have to pay a hefty amount to the Uncle Sam.

Uncle Sam has an eye on everything. He wants his share, whether it’s bronze, silver or gold.

The United States Olympic Committee gives cash rewards worth $25,000, $15,000 and $10,000 to Olympic medal winners for gold, silver and bronze respectively. But like any cash reward, the IRS regards this as taxable income.

The victory tax doesn’t make the US athletes feel victorious at all. The highest tax bracket for any Olympic winner is 39.6%, which amounts to $9900 for receiving a gold medal. For a silver medal, an athlete has to pay $5940 and for bronze, it’s $3960.

The only respite is for the athletes in the lower tax brackets. They don’t have to pay a lot on tax. Plus, they would get tax deductibles for their massive training expenditures.

The story is not finished yet

No matter how much it shines, the medal is not that valuable in the market. If you check the commodity price of the metals, then gold will fetch $600 from the market, silver around $300 and bronze almost nothing. But, in the open market, they would be fetching a higher amount, $10,000 or above this figure. And, an athlete would only get this amount if he/she decides to sell his/her Olympic medal.

A ray of hope for the US athletes

In 2012, Congress introduced a bill to give a break on Olympic medals. Sen.Marco.Rubio, R-FIa proposed a bill to protect medals from the IRS. But, this bill couldn’t be passed. It’s sad that Olympians have to suffer financially who work so hard to achieve athletic excellence and make the nation proud.

A similar bill has been proposed by Sens. John Thune, R-S.D., and Chuck Schumer, D-N.Y to give a tax break to Olympic athletes.

The U.S athletes have created a new record by winning 1000 Olympic gold medals in summer games. This is double than any country in the world. So, these athletes deserve a tax break. They should be only focused on winning medals and not about breaking the bank.

This year Michael Phelps is in the news for owing $55,000 to the IRS for his 5 gold Olympic medals and one silver medal. It’s another story that his net worth is $55 million. So, he can easily pay the amount. But, isn’t it demoralizing for the top US athletes like him?