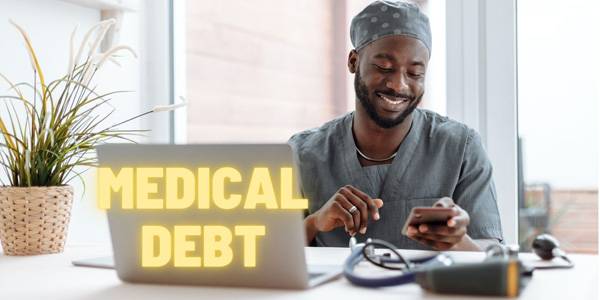 The consumer watchdog CFPB says that about $88 billion worth of medical debts is listed on the credit reports of 43 million Americans. The agency also says that medical debt makes up 58 percent of all bills that need to be paid.

Medical debt is a big problem for many people without good credit. A strong credit score could drop by as much as 100 points if the debt were sent to collections, which might not have been fair.

It's hard to tell medical debt is real in many ways. Few choose to have medical debt, and most patients don't know how much a service or procedure will cost. There is no information or interest rate given upfront. People and families must deal with a billing and collection system full of mistakes that are hard to understand and complicated.

To help consumers, CFPB has just announced a new rule that should make it easier for people with medical debt to maintain good credit scores. Let's discover the fundamental changes and how consumers can leverage them to build good credit.

What changes are being made to medical debt and credit scores?

People can check their credit report after July 1, 2022, to ensure a medical debt that has been paid off does not appear in their credit report. In contrast, if any paid medical bills appear, they should dispute them with each credit bureau that lists them. The good thing is most healthcare providers don't report to the credit bureaus, which means that most medical debt isn't typically included on credit reports and does not generally factor into credit scores.

What impact will those changes have on individual credit scores?

Laurence Lee CEO of The Great Brain Experiment, feels optimistic about the new rule. He comments, "the impact of this rule change will be significant. Currently, medical debt is the number one reason for Americans to have low credit scores. This new rule will help to erase the negative impact that medical debt can have on people's credit scores.

There are some things that people can do in the meantime to boost their credit score. One is to ensure they are paying all of their bills on time. Another is to keep their credit utilization ratio low. This is the ratio of credit used to available credit, and try to keep it below 30%.

What can people do to use the new rules on medical debt and leverage them to build a better credit score?

James Holland, Founder of Life Part 2, says, “What you can do to use the new rules on medical debt to your advantage depends on your individual credit score. If your score is low, you may want to consider paying off your medical debt in collections. This will reduce the amount of debt that is considered when calculating your credit score. If your score is high, you may want to wait to pay off your medical debt until after you have applied for a loan or mortgage. This will help you get the best interest rate possible.”

Simon Courtney, Editor at Healthcare Business Tech, takes a slightly different approach. He says, "there are a few things consumers can do to take advantage of the new rule and improve their credit scores. First, they should ensure all medical bills are paid on time, even if they are being paid in installments. Second, they should keep track of when bills are removed from their credit report so that they can be sure to check their credit score after 180 days."

What's the immediate impact of a higher credit score?

James Holland adds, “the immediate impact of a higher credit score is that you will be eligible for a lower interest rate on loans and credit cards. This can save you a lot of money in the long run. A higher credit score can also help you get a job, as many employers look at credit scores when making hiring decisions.”

Laurence Lee shares a similar sentiment. He says, "High credit scores can help people get approved for mortgages, car loans, and more. A high credit score can help you lower interest rates on those loans.

The new rule on medical debt is a step in the right direction and will help ensure that people with medical debt don't have their credit scores dragged down. Hopefully, this rule will also inspire other lenders to change their policies so that medical debt doesn't have such a negative impact on people's credit scores."

A higher credit score may enable people to buy insurance policies covering most medical treatments and procedures—Sara Graves chimes in.