Jerome Kerviel: The most indebted person in the world, owes $4.9 billion 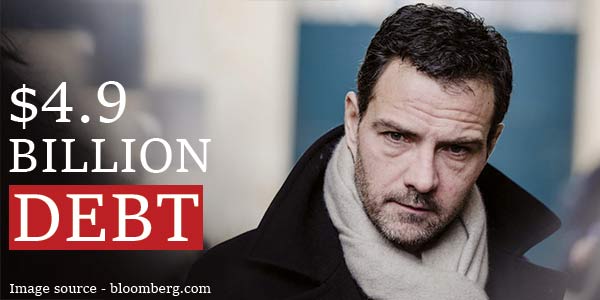 Under the breeze of today's dropping economy, you might find it hard to repay $5,000 even if given some period. You might try to escape leaving everything behind if you find that you need to pay off $1, 00,000 in debt. Well, I feel you should meet Jérôme Kerviel, or at least learn about him - the most indebted person in the world!

Yes, in this age of when serial entrepreneurship and capitalism is thriving, France’s Jérôme Kerviel owes a jaw-dropping $ 4.9 billion, which is equivalent to Gordon Moore’s net worth – the Co-founder and Chairman Emeritus of Intel Corporation.

In late October 2012, the appeals court rejecting Jerome’s petition declared that the former junior trader for France's second largest bank, Societe Generale, owes the company a whopping $4.9 billion – an amount so gigantic that it could not be repaid.After losing his appeal, Jérôme Kerviel, the former banker at the heart of one of the world's biggest rogue trading scandals, has been sentenced to be kept in prison for 3 long years and directed to pay back the amount to his employer - Société Générale.

In October 2010, Kerviel, a 35 year old finance graduate from the University of Nantes and a junior trader with Societe Generale, one of France's oldest banks, was first accused guilty of forgery, breach of trust and unauthorized computer use in one of the biggest trading frauds in history, which had almost ruined the latter. Since then, Jérôme has been fighting a battle in the Paris appeals court, seeking a complete discharge.

Though Kerviel admitted his unauthorized bets on the futures markets without covering his risks – at one point he was gambling with up to $50 billion, which was more than Société Générale worth, he cleared that his employers were well aware of his exorbitant trades in 2007 and 2008 and overlooked as they were making good return, which the bank refused in court.

With immense frustration, Kerviel described himself as a hamster in an ever-whirling wheel of a corrupt financial organism run on voracity and profits.

In spite of his lawyers’ repeated arguments that the bank had deliberately used the rogue trading to mask its losses on sub-primes, the appeals court straightly rejected these arguments and announced an imprisonment for up to five years, with two years suspended and also a repayment order of a colossal $4.9bn in damages.

One of Kerviel's lawyers, David Koubbi, addressed the verdict as "absolutely lamentable" and said they would consider taking the case to France's highest court - the court of cassation.