Household debt tumbles to 29-year low - What to expect now 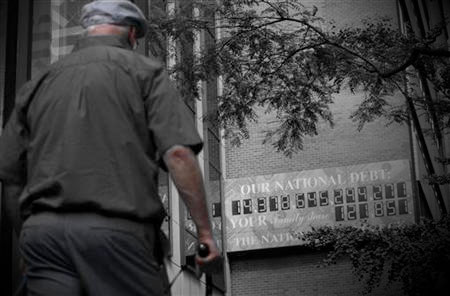 An assessment of the US household debt burden in the third quarter found it to be in its lowest level in 29 years, which is undoubtedly going to help free up more liquid funds for consumer spending and support the bruising economy.

The household debt service ratio (an estimation of the portion of debt payments to disposable personal income) fell down to 10.61% from 10.72% in the second quarter, the Federal Reserve said on Thursday. Although a wee dip, it was the lowest level since the fourth quarter of 1983 and obviously disperses some hope (both for the Govt. and consumers).

"Consumers have more money in their pockets to spend, which should be positive for the economic recovery going forward," said Gennadiy Goldberg, an economist at TD Securities in New York.

The US households built up massive debt burdens as of the unfortunate past happenings like the double-dip recession and the housing bubble! And in order to pay off those debts, a restraint had to be put on consumer spending and the economy’s recovery.

The debt service ratio that is responsible to shoulder the outstanding mortgage and consumer debt, climbed in the third quarter of 2007, shortly before the economy saw the grim face of the monster called recession!

The Fed is determined to help the consumers overcome this crucial situation and for that it has kept interest rates near record lows since December 2008. Moreover, it has brought around $2.4 trillion in bonds to make further dips in borrowing costs!

An even much broader sphere of financial obligations that includes lease payments for autos and costs of renting homes also came down in the third quarter, plunging to 15.74% of disposable income, which is the lowest level since the first quarter of 1984.

What the drop reflects is an easier burden for mortgage borrowers since monthly payments dropped to 8.90% of total disposable income in the third quarter - the lowest in 11 years.

"You have a lot of people refinancing their mortgages at lower rates," Goldberg said. On the contrary, the relative cost of renting skyrocketed to its highest level since the first quarter of 2010.

It is the weak housing market that has kept people far away from home ownership and pushed towards renting, and pushing up rents. However, at the same time, a modest economic recovery has encouraged some people to get their own lodging, thus further strengthened the rental market.