Bankruptcy in the airline industry 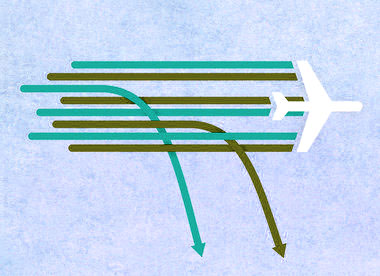 The United States Bankruptcy Code contemplates two alternative solutions for firms that are in financial distress and are filing for court protection: Chapter 7 (Liquidation) and Chapter 11 (Reorganization) Chapter 7 allows for an orderly, court-supervised procedure by which a trustee collects the assets of the firm, reduces them to cash, and makes distributions to creditors subject to the debtor's right to retain certain exempt property and to the rights of secured creditors.

Chapter 11 allows the bankrupt firm to continue operating while the firm's management restructures its business. We focus on Chapter 11 filings and drop firms filing under Chapter 7 because we are interested in the changes in the variety and of the services provided by a firm that operates under bankruptcy protection, and firms filing for Chapter 7 cease operations and liquidate their assets.

A firm operating under bankruptcy protection can benefit from provisions granted by the United States Bankruptcy Law, such as creditor protection and greater flexibility to renegotiate and rescind contracts. For instance, under Section 1113 of Chapter 11, an airline can unilaterally modify labor agreements if negotiations with employees and labor unions are unsuccessful, and can terminate labor contracts it deems no longer needed. And, under Section 1110 of Chapter 11, the bankrupt firm can selectively reject leases on aircrafts and freely return unwanted and outdated aircrafts to the lessor. These concessions allow the firm to downsize, reduce capacity, and reduce the variety of products offered shifting from the least profitable ones to the most profitable ones, at a lower cost than what would have to be borne outside of bankruptcy. As a consequence of this, the firm frees funds that might be reallocated to improving the of the products that the firm continues to offer.

Rejecting leases on selected aircrafts frees up funds that allow the carrier to reorganize its fleet and to replace older aircrafts with newer, more comfortable, and higher ones. Rescinding leases on airport facilities, such as gates and hangars, can also free up funds so that the carrier can acquire better gates that increase the efficiency with which the carrier can turnaround the plane for the next flight, and lowering departure and arrival delays In some, rejecting leases on aircrafts and gates lower the cost of reducing service (frequency and markets served), but can allow an increase in the of the services that the carrier still provides.

Rejecting labor contracts can have an ambiguous effect on the of services If layoffs result in a smaller workforce than needed to efficiently perform the daily operations of the firm, the carrier's of service drops. But if layoffs allow the firm to replace entrenched and inefficient personnel with a more efficient workforce, service increases. For instance, laying off necessary gate agents and aircraft cleaning crews can delay the process of boarding a flight, thus resulting in longer departure and arrival delays for the late-in-boarding flight as well as for the flight that is incoming to that gate. On the other hand, if the laid-off gate agents were unnecessary for the firm's operations, or were entrenched and inefficient employees that can now be replaced with more efficient ones, then there might be some improvement (or no effect) in product.