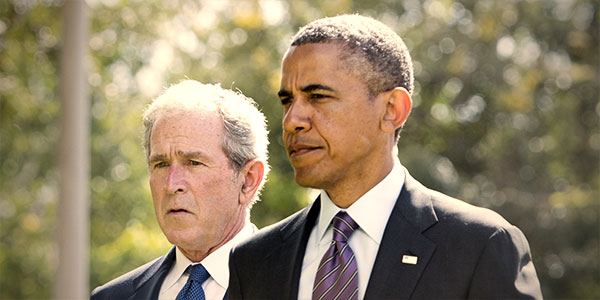 Well, we cannot always blame the ruling president for each penny added in the national debt.

Obama vs Bush: On debt and economy

The comparison below shows who did what for the nation and who created more deficits - Barack Obama or George W. Bush.

George W. Bush: He spent about $500 billion a year for defence work. He also launched the “War on Terror” (WoT) after the 9/11 attacks, which costs more than $1.5 trillion over its lifetime.

Barack Obama: As per records Obama spent more than Bush on defence activities, i.e., as much as $800 billion a year. He gave orders not to pursue the WoT in 2011. However, the war costs $825 billion.

George W. Bush: He launched EGTRRA tax rebate to fight the recession in 2001 and the JGTRRA tax cuts in 2004 to help businesses recover from the damages caused by the 9/11 attacks.

In 2005, he failed to react quickly to the Hurricane Katrina which costs $200 billion in damage. As a result of this incident, the GDP fell to 1.5% in the 4th quarter of 2005. However, Bush added $33 billion to the FY 2006 budget to help deal with this situation. If he had done it earlier, it may have improved growth in 2005.

Barack Obama: He passed the $787 billion Economic Stimulus Act, which created jobs and ended the recession in the 3rd quarter of 2009.

George W. Bush: He created the Medicare Part D prescription drug program, which helped senior citizens with the costs of their prescription drugs up to a certain point. It’s popularly known as the “doughnut hole.” Since he didn’t increased the taxes to fund this program, it created $550 billion dues.

Barack Obama: He signed the Affordable Care Act in 2010 to reduce the health care expenses. But as per the reports, ObamaCare provision and tax subsidies are increasing the debt.

George W. Bush: He passed the Bankruptcy Prevention Act in 2005, which made people difficult to declare bankruptcy. That’s why they relied on home equity loans, which in turn caused mortgage defaults to rise 14% per year.

Barack Obama: He signed the Dodd-Frank Wall Street Reform and Consumer Protection Act into a federal law in 2010, which less likely made another financial crisis.

Barack Obama: He also has set up record-breaking budget deficit of $6.6 trillion, a 56% increase. He created $7.9 trillion by the end of FY 2016 that’s 5th largest rise percentage-wise.

According to the above stats, Obama accrued more debt than Bush.